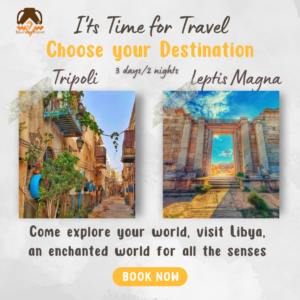 On a short break to Libya, you will get the first impression of this fabulous country – that is just opening up to visitors. Tripoli, the oriental but cosmopolitan capital is on the itinerary as well as the Roman site of Leptis Magna. Transportation is by air-conditioned saloon car or minibus and accommodation is at Victoria hotel, one of the best 3-star hotels in Tripoli. Full board package for 3 days and 2 nights including visa support.

Meet & assist on arrival at Mitiga airport and transfer to Victoria hotel in the center of Tripoli. Meet your local English-speaking guide at the hotel. He will inform you about the tour. Lunch and then your tour begins.

Libya’s capital and largest city, Tripoli was founded by Phoenician traders in the 5th century BC. It was later absorbed and shaped by the colonizing influences of the Roman Empire, the Muslim world of the East, the Ottoman Empire and Italian occupation. Today it stands as an eclectic mix of cultures as Islamic, Turkish and local Libyan mores merge to create a rich and colorful heritage.

We drive to Tripoli´s II WW Cemetery, which contains 1,369 Commonwealth burials of the Second World War, 133 of them unidentified. There will be also avisit to an old Christian church and much more.

Later catch a glimpse of Tripoli’s old town (Medina). The tour will include Funduq al Zahar, one of Tripoli’s numerous early merchants’ inns; the Clock Tower, an Ottoman Baroque piece completed in 1898, Cathedral, Church of Santa Maria, the 18th century British Consulate, the 17th century French Consulate, the Arch of Marcus Aurelius and the mosques and souks of the medina. Lunch in a local restaurant. (L, D)

After breakfast we head for Leptis Magna – one of the most spectacular Roman sites along the Mediterranean coast. Let your guide explain how the Romans lived in this part of their empire and what their favourite pastimes were. Lunch at a local restaurant nearby the site. Dinner at one of many fine restuarants in Tripoli and overnight at your hotel. (B,L,D)

Notice: The museum of Leptis Magna is closed to visitors.

Later we return to Tripoli where you will have a chance to explore 20th century Italian Tripoli. Basically, your exploration of Tripoli’s 20th-century Italian architecture heritage will take you through some neighborhoods. Tripoli underwent a huge architectural and urbanistic improvement under Italian rule. Italo Balbo, the 1934-1940 Governor of Italian Libya, is considered by some Italian historians (like G. Gentile) to be the Father of modern Libya. Overnight at Victoria hotel. (B, L, D)

Breakfast at the hotel and transfer to the airport 2 hours before the time of the departure flight, B

If you flight in the afternoon, go with your guide to the old town with your guide to do some shopping for souvenirs – or just wander around to get enticed by the confusing array of streets and alleyways in the Medina. Have a break in one of Tripoli’s cafés before transfer to Mitiqa International Airport for your flight after what it had been unforgettable tour.