THE GATEWAY TO THE SAHARA 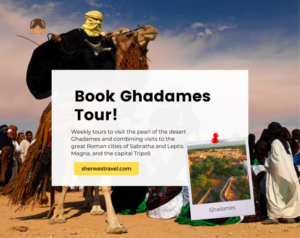 Weekly tours to visit the pearl of the desert Ghadames and combining visits to the great Roman cities of Sabratha and Leptis Magna, and the capital Tripoli a modern city filled with remnants of a grand past. Also included Jebel Nafusa, this is the heartland of the Berber people who claim descendancy from the original inhabitants of Libya and maintain a strong cultural and linguistic identity in this rugged part of the country. Remains of ancient Berber architecture dot the landscape, reflecting a lifestyle that was prevalent until only a couple of decades ago.

The Libyan oasis town of Ghadames is situated in the western Fezzan, close to the meeting point of the Algerian and Tunisian frontiers. It has a desert climate: summer and winter resemble each other, with hot days followed by cold nights. 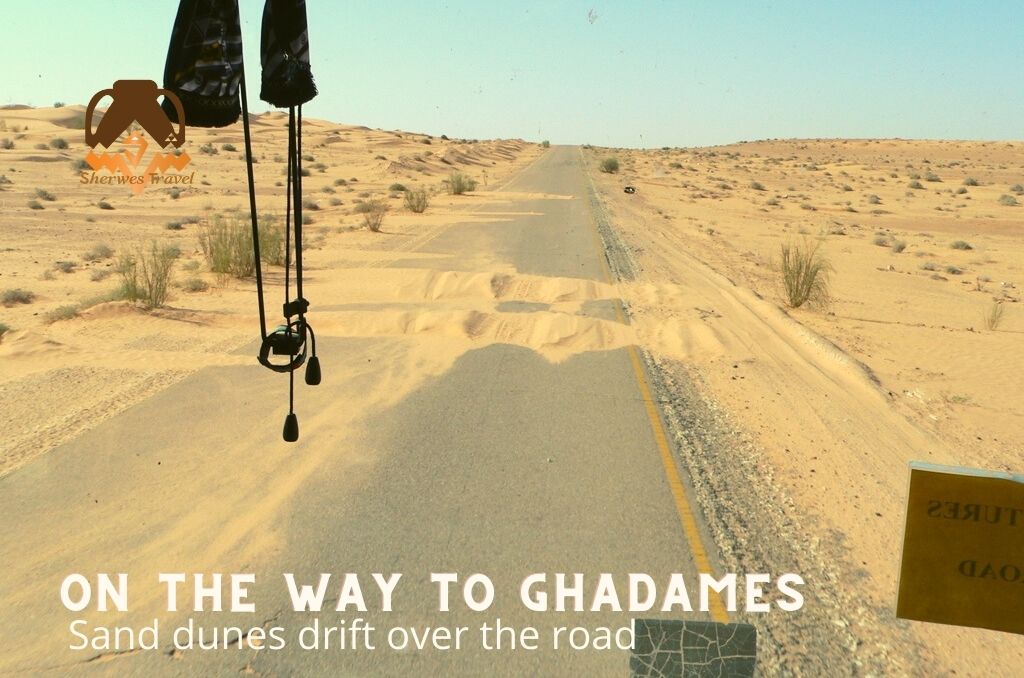 Ghadames appears to the traveler at the end of a long journey, across immense sand dunes which sometimes drift over the road, sometimes covering it, and whose crests rise imperceptibly with the wind.  As the ribbon of tarmac road curves across the desert, the traveler discovers Ghadames. The whitewashed roof terraces of the legendary town, decorated at the corners with small crenellations to ward off the evil eye, spread out into the oasis.

Ahlaan wasahlaan “Welcome” to Libya – you are warmly welcomed our Meet & Great manager and after clearing Custom and Immigration, you are transferred to Victoria hotel. The drive gives you your first glimpse into the life of the people who live in the capital city.
Meet your local English-speaking guide at the hotel. He will inform you about the tour. Lunch and then the tour begins.
We drive to Tripoli´s II WW Cemetery, which contains 1,369 Commonwealth burials of the Second World War, 133 of them unidentified. There will be also a visit to an old Christian church and much more. Later with your guide, you will get an impression of this fascinating city with its long and changing history. (L. D)

After breakfast, we drive 70 km south of Tripoli city you face a formidable wall of hard rock.  That is Jebel Nafusa.  The mountain rises abruptly from the desert plain of Jefara to a height of over 750 meters, with the highest peak of a modest 968 meters. The mountains are awe-inspiring, bare, rugged, savage and without vegetation, however, the fertile plains on the mountain high plateau are full of olive, fig, fruit trees, and vineyards.

This is a fascinating journey to Jebal Nafusa the heartland of the Berber people of Libya, with a visit to the magnificent 12th century fortified granary of Qasr al-Haj (chosen as one of the World’s 80 Greatest Treasures in a recent BBC series). Continuing to Tarmeisa to see fantastic views from this deserted and ancient stone village of Tarmeisa, clings to a narrow rocky outcrop overlooking a stunning down off the escarpment over the Sahel Al Jefara, with its hundreds of valleys heading northwards. Then you continue driving to Jadu which is considered one of the most important towns in the Nafusa Mountains, as it was, more than once, the capital of the Nafusa Mountains.  Places of interest include the natural spring off Ain az Zarqa. This small, crystal-clear pool fringed by palm trees is stunningly located at the bottom of cliffs that surround it on three sides. There are also waterfalls, streams, farms, troglodyte dwellings, cliff-top houses, and magical groves. The local people of Jadu have established a private museum, housing several artifacts of ethnographic nature. Al-Barouni Museum is considered among the best museums in the region, embodies the Berber heritage and architecture of the Western Mountain. The visitor will be rewarded with models of traditional crafts and industries as well as ancient archaeological stone artifacts, including a model of a traditional oil mill, called and in Tamazight. Lunch.

Later we descend the mountain and head further south into the Sahara until we arrive at Ghadames, one of the most ancient towns in the Libyan Desert. Overnight in Ghadames at al-Waha Hotel. Included meals: (B, L, D)

Described as the “Jewel of the Desert,” Ghadames is an attractive oasis town located on the edge of the Sahara near the point where the borders of Algeria, Tunisia, and Libya meet. Once the southern outpost of the Roman Empire, the old town of Ghadames is very picturesque, with labyrinthine streets lined with mud-brick buildings. Ghadames has preserved its cultural purity, which we will see during visits to the Cultural Museum, the Great Mosque, and the Main Square, which was once used as a slave market. In one of the preserved mud-brick houses, we will be treated to a traditional lunch served in a local manner. This evening, we’ll travel to the nearby desert to watch sand dunes in Algeria change hues from gold to blazing red at sunset.

Leaving the Sahara behind, we retrace our steps towards Tripoli. Our main stop will be in Gharyan which lies at the foot of the plateau Nafusa Mountains, 50 miles (80 km) south of Tripoli, Gharyan was on the trade routes both south to Fezzan and over the Nafusa Mountains. By 1884 the Ottomans had established a mayor and town council in Gharyan.

It was considered the center of Libyan resistance against the Italian invasion early 20th century. Gharyan has a population of 85,219 making it the biggest city Olive oil processing, flour milling, carpet weaving, and pottery making are the main occupations.

Its famous troglodyte caves are a major attraction for tourists. The root “Ghar”, in the name Gharyan, means “cave”. The caves were dug vertically down into the rocky ground.

We stop at Al-Qawasem area in Gharyan which is famous for making the finest pottery due to the quality of clay, and this industry is one of the national industries that we are proud of, where some shops participate in some types of industries in some of the exhibitions held in the city of Tarabs, which were admired and satisfied and bought by everyone for it.

Later we return to Tripoli. Overnight in Victoria Hotel or similar. Included: (B, L, D)

Your Libyan Roman experience starts with a tour to Sabratha, located on the Mediterranean coast about a one-hour drive west of Tripoli. In Roman times, the Tripolitania Province had three cities, Leptis Magna, Oea (now the modern Tripoli), and Sabratha. Among all the coastal sites, Sabratha stands out as the most beautiful. A World Heritage Site, Sabratha was founded by the Canaanites in the 6th century B.C. and ruled by Carthage, Phoenicia, Numedia, and then by Rome in 46 B.C.
The most spectacular site in Sabratha is the theatre, built during the reign of Emperor Commodus (161-192 A.D.) with its three-story backdrop of columns, it remains in use today as an arena for both theatre and concerts. Other monuments and areas of interest include the Temple of Liber Pater, the Basilica of Justinian, the Capitolium, the Temple of Serapis, the Temple of Hercules, and the Temple of Isis. After a day spent immersed in the history of the region, return to Tripoli in the afternoon.

We drive back to Tripoli to explore the old, whitewashed medina (old city), which is full of mosques and is the historic heart of Tripoli. Compared to the bazaars in Istanbul, Marrakech, and Cairo, the old souk here is quiet and peaceful. No one seems to be in a hurry, and we have time to explore at our leisure. We make a stop at the Gurgi Mosque and the Arch of Marcus Aurelius, which is the last structure remaining from 163 AD when Tripoli was an ancient Roman city known as Oea. The old British Consulate dates from 1744 and was first built as a home for the founder of the Karamanli Dynasty. You also enjoy a magnificent view over the medina from the rooftop of the House of Yusuf Karamanli, where you can also see how Libyan rulers lived in the early 19th Century.

After lunch, take a walk in the district built during the Italian occupation to see the characteristic architecture of the 1920s and 1930s.
Dinner in a local restaurant and overnight at Victoria hotel or similar. (B, L, D)

Today you visit the outstanding site at Leptis Magna, one of the greatest ancient sites in the world. It was originally a Phoenician trading port and prospered for nearly 1000 years before Vandal invasions and sandstorms brought its downfall. In its heyday during the reign of Libyan Emperor Septimius Severus, it was second only to Rome and housed over 100,000 people. This vast city remained buried for some 1300 years, and it was not until the 1920s that a major excavation by Italian and Libyan archaeologists revealed the limestone and marble wonders that we explore today. We return to Tripoli for dinner. Overnight at Victoria hotel or similar. (B, L, D)

Breakfast and departure to Mitiga International Airport for your international flight after what had been an unforgettable tour. We wish you a pleasant journey onward. (B)