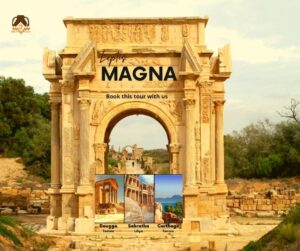 An unusual trip through history to discover the most famous ancient wonders and travel through history and get into the mystery of ancient Libya and Tunisia. With this 7 days Libya and Tunisia tour, you get to visit the great ancient cities of Leptis Magna and Sabratha, and also the capital Tripoli with its Medina (old town) before taking your journey to Tunisia to visit the country’s famous marvels like the Roman city of Bulla Regia, Dougga, Carthage, Tunis Medina (old town) and Sidi Bou Said, a picturesque blue and white village.

Meet & assist on arrival at Mitiga airport and transfer to Victoria hotel in the center of Tripoli. Meet your local English-speaking guide at the hotel. He will inform you about the tour. Lunch and then your tour begins.

Libya’s capital and largest city, Tripoli was founded by Phoenician traders in the 5th century BC. It was later absorbed and shaped by the colonizing influences of the Roman Empire, the Muslim world of the East, the Ottoman Empire, and the Italian occupation. Today it stands as an eclectic mix of cultures as Islamic, Turkish, and local Libyan mores merge to create a rich and colorful heritage.

We drive to Tripoli´s II WW Cemetery, which contains 1,369 Commonwealth burials of the Second World War, 133 of them unidentified. There will be also a visit to an old Christian church and much more.

Later catch a glimpse of Tripoli’s old town (Medina). The tour will include Funduq al Zahar, one of Tripoli’s numerous early merchants’ inns; the Clock Tower, an Ottoman Baroque piece completed in 1898, Cathedral, Church of Santa Maria, the 18th century British Consulate, the 17th-century French Consulate, the Arch of Marcus Aurelius and the mosques and souks of the medina. Lunch in a local restaurant. (L, D)

After breakfast, we head for Leptis Magna – one of the most spectacular Roman sites along the Mediterranean coast. Let your guide explain how the Romans lived in this part of their empire and what their favorite pastimes were. Lunch at a local restaurant nearby the site. Dinner at one of many fine restaurants in Tripoli and overnight at your hotel. (B,L,D)

Notice: The museum of Leptis Magna is closed to visitors.

Later we return to Tripoli where you will have a chance to explore 20th century Italian Tripoli. Basically, your exploration of Tripoli’s 20th-century Italian architecture heritage will take you through some neighborhoods. Tripoli underwent a huge architectural and urbanistic improvement under Italian rule. Italo Balbo, the 1934-1940 Governor of Italian Libya, is considered by some Italian historians (like G. Gentile) to be the Father of modern Libya. Overnight at Victoria hotel. (B, L, D)

Today after breakfast you will visit Sabratha. Amongst all the coastal sites, Sabratha stands out as the most beautiful. A World Heritage Site, Sabratha was founded by the Canaanites (6th c. B.C.), ruled by Carthage, Phoenicia, Numedia, and then Rome in 46 B.C. The site offers a majestic collection of public buildings, arenas, temples of Liber Pater, Serapis, Isis, and Hercules. Tripoli ” Oea” (the bride) of the Mediterranean is the capital of Libya. (B, L, D)

After breakfast visit the Museum of Libya. The museum utilizes fog screen technology, in which traditional and bulky fixed screens were replaced by projection screens which produce a thin curtain of “dry fog” that serves as a translucent projection surface.                            Notice: The museum could sometimes be closed without pre-notice, if so then we will replace it with another highlight.

Later we drive to the old town with your guide to do some shopping for souvenirs – or just wander around to get enticed by the confusing array of streets and alleyways in the Medina. Have a break in one of Tripoli’s cafés before transfer to Mitiqa International Airport for your flight after what had been an unforgettable tour. (B)

Upon arrival at Tunis Carthage International Airport, you will be met by Sherwes Travel’s local representative and transferred to
your hotel.

Tunis, the capital of the country, is a bustling metropolis and the home of one-sixth of the country’s population. Situated in the Gulf of Tunis on the Mediterranean Sea, the modern city extends along the coastal plains and to the surrounding hills. It is a city of many contrasts, with its modern office buildings, shopping malls and European cafes, the colonial French style of the Ville Nouvelle, and the dynamic Arab souks of Tunis’ old Medina.

You leave Tunis early this morning for Bulla Regia. This ancient site is famous for its unique subterranean villas, which belonged to the wealthiest of its inhabitants; you descend to see these luxurious villas and their splendid floor mosaics, still in situ.

After lunch you continue to Dougga, the best-preserved Roman city in Tunisia and a UNESCO World Heritage Site. The monumental Capitolium temple stands in the city’s Forum, with a breathtaking view over the green rolling hills and plains below. The theaters, gymnasia, baths, shops, stone paved streets and lavish villas are all testimony to the golden age this North African city enjoyed during the Roman era.

Today you will visit the Bardo Museum, famous for its collection of Roman mosaics. Later you will visit the ancient Medina of Tunis with its bustling markets after the Medina you will explore the European side of Tunis. In the afternoon visit Carthage, with its Roman villas and ancient baths. You will also have time to stroll through the charming Moorish village of Sidi Bou Said.

Your trip ends today, after breakfast. Check-out and transfer to Tunis Carthage International Airport.
We wish you a pleasant flight!