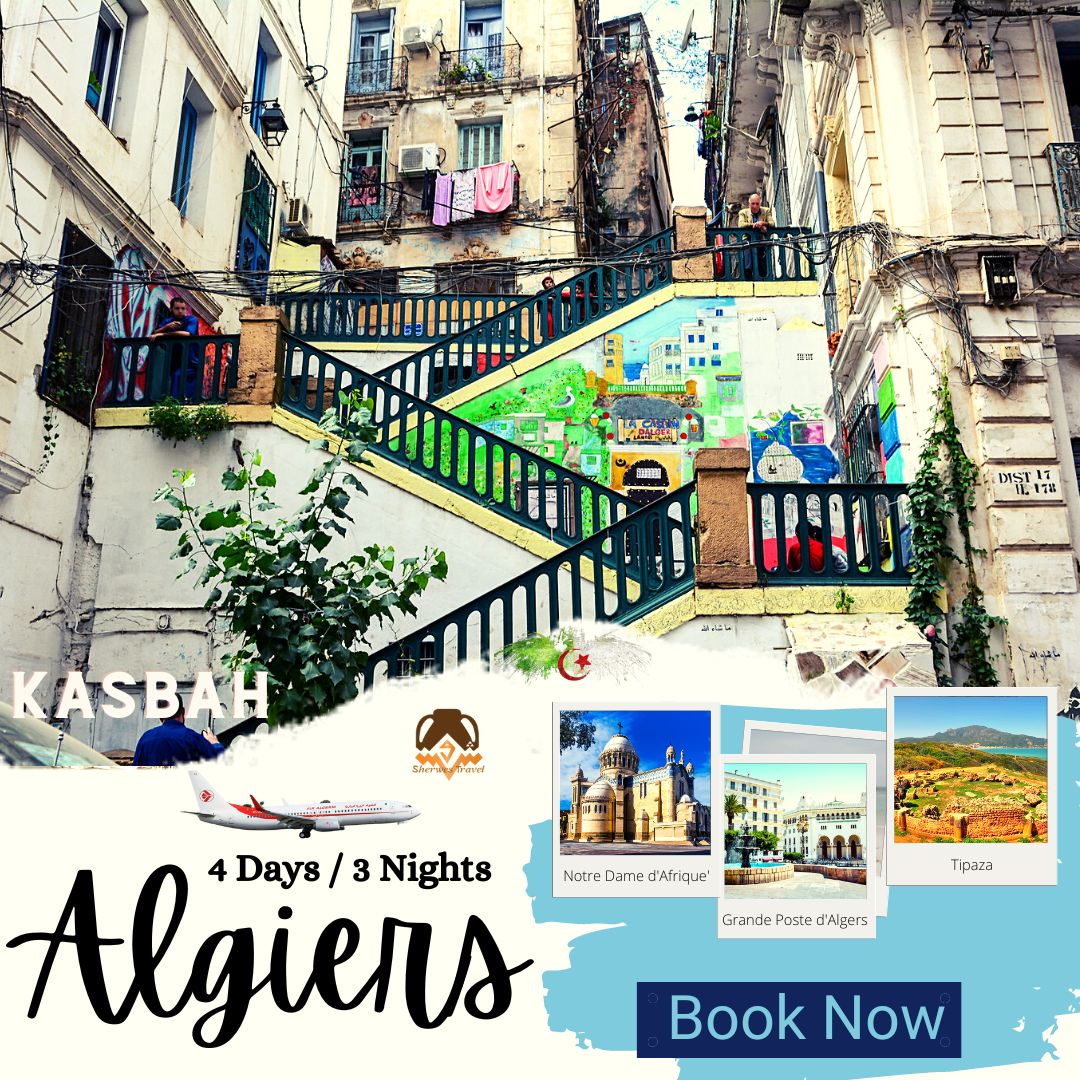 The French, charmed by the bright light that spreads throughout the country and the white hue of the buildings that climb the hill, called it “Algiers, the white”, a name that could not better adapt to this large bustling city, which faces the Mediterranean and turns its back on the desert, between Morocco and Tunisia. Capital of one of the largest and richest countries in Africa, Algiers has one of the largest ports on the entire continent. With more than three million inhabitants, the city is divided into two areas: one modern, plunging into the coast, and the other ancient, the Kasbah, the old medina, clinging to the top of a hill, 120 meters above sea level.

On our excursion to Cherchell and Tipaza, you’ll discover its Roman remains and learn about the exciting history of the ancient imperial province of Caesarian Mauritania.

Arrive in Algiers, transfer to your hotel (20 minutes by car). Walk with your guide to explore the
surroundings of your hotel located in the center of town. (No meal included). Overnight in Algiers.

One-day trip to Algiers. Departure from the hotel at 8:30 am for a day tour of the capital, “Algiers la Blanche”. We start the visit by the Casbah (classified as a World Heritage Site), the Citadel, the residence of Dey in the upper Casbah, then crossing walk through the narrow streets, stop at artisans, the house-museum of the heroes of the “Battle of Algiers” (1957), the Ketchaoua mosque (outside), the Pasha palace built-in 1798 in the lower Casbah, is an exceptional architectural wealth. It houses the museum of miniature, illumination, and calligraphy and the Museum of Popular Arts and Traditions (domestic life, housing, clothing …).

Continuation to the basilica of “Notre Dame d’Afrique”, a great panorama of the city and the bay. Then departure for lunch either at the Casbah in a guest house or in a restaurant in the modern quarter of the capital around the “Grande Poste” (neo-Moorish architecture), the most emblematic monument of Algiers.

In the afternoon, visit the Museum of Antiquities and Islamic Arts located in Liberty Park, which is the oldest museum in Algeria. It covers the history of art in Algeria for 2500 years, then the Bardo museum (a former residence built in the 18th century) and the Moorish villa- a museum of prehistory and ethnography.

Continuation of the visit to the Monument dedicated to the martyrs of the Algerian revolution (1954-1962), and nearby the army museum which traces the history of the country from the Numidian era to the present day. If time permits, before returning to the hotel, stop at the El Djazair ex Saint Georges hotel for a tea break on the terrace overlooking its botanical garden, dinner, and overnight in Algiers. (B, L, D)

One-day excursion to Cherchell-Tipasa: After breakfast, depart at 8.30 a.m. to Cherchell, 100 km west of Algiers, ancient Cesarea, was founded in the fourth century BC by the Phoenicians and from 40 AD, it was the capital of the Roman province of Mauretania Caesarean section, which extends to the Atlantic Ocean. Visit the museum and a part of the ruins. Continue to Tipasa, a Roman city by the sea 70 km west of Algiers, the Phoenicians founded a counter to the fifth century BC. The city experienced its rise as the Numidian king Juba II and becomes Caesaria (current Cherchell) one of the centers of Greco-Roman culture in North Africa. After the lunch (fish meal), visit the museum and walk in the archaeological park classified as world heritage by Unesco: amphitheater, theater, large basilica … and among the ancient tombs, a stele has been erected in memory of Albert Camus, philosopher, and Nobel laureate, born in Algeria who dedicated admirable pages to Tipasa “Noces” (Wedding).

Return to Algiers, stop on the road to visit the Mausoleum Royal Mauretania (some historians believe that this is a royal mausoleum built by King Juba II who reigned from 25 BC. to 23 AD. and his wife, Queen Cleopatra Selene), dinner and overnight in Algiers. (B, L, D)

Your trip ends today. After breakfast, check-out, and transfer to Houari Boumediene International Airport 3 hours before the time of the departure flight. (B)

We wish you a pleasant flight!

Beaux-Arts style hotel in Algiers, is an excellent choice for a stay in the District of Algiers Centre

A restaurant, a rooftop terrace, and a café are available at this non-smoking hotel. Free buffet breakfast is offered, as well as free Wi-Fi in public areas, and reception. Other amenities include coffee/tea in public areas, concierge services, and dry cleaning/laundry services.

Hotel Des Beaux Arts has 22 rooms accessible through outdoor corridors and including mini bars with some free items and a safe. These rooms feature individual décor and furnishings and include desks. Select Comfort mattress and top-quality bedding. A 32-inch plasma TV offers themed satellite channels.

Bathrooms include a shower/tub combination with a jetted tub, rainfall showerhead, and hydromassage showerhead, free toiletries are available. This Algiers hotel offers free Wi-Fi. In addition, the rooms have mineral water (free) and blackout curtains. Hypoallergenic bedding and hairdryers are available on request. Maid service is provided daily.

Welcome to Algiers welcome to the hotel El Aurassi.
In the heart of Algiers, live an incomparable and authentic stay…
Modern, warm, and refined, the Hotel El Aurassi is a haven of relaxation.
Nestled in the heights of Algiers from where the Bay of Algiers offers you a unique and breathtaking panorama, discover a wide range of activities, and live a total hotel experience.

Hotel El Aurassi has 414 rooms, 30 suites, and 8 executive suites richly appointed and in which harmony meets elegance in an intimate and serene setting.
Your stay will be presented to you in a setting of exceptional services where the emphasis is on a service of absolute discretion and in anticipation of your every need and desire.

On level “D” of the Hotel El Aurassi, is the shopping arcade, a set of shops where shopping will be more than a hobby, a delight.

Nothing better to afford high-end products and major global brands.

A dozen stores are ready to welcome you and meet your expectations.

Perfumery among the best brands in the world, finely made handicraft products, clothing for men and women of great couturiers, or goldsmith shops or luxury watch brands, everything is at the disposal of a refined and demanding clientele.